I've just posted this over at my new address

Like many others I was very excited to see Style Arc release this pattern and I am very pleased to say that it has lived up to expectation. 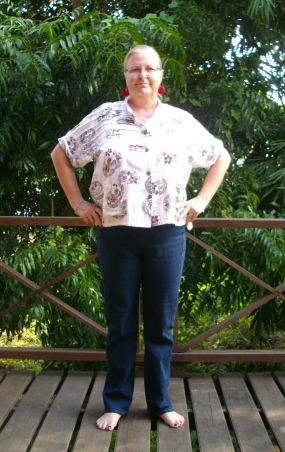 First I made a pair of shorts in the same blackish denim that I used for my Barb jeans. After wearing these for a while I decided that the only change needed was to take 1.5cm from the centre front down to nothing at the side seams. (Or what would be the side seams if they weren’t moved forward as they are on the Flos.) This is not because the front crotch length is too long (that fit was great from the start) but because I am very short waisted and the waistband was creasing and folding over.
As a a comparison here are the Barbs next to the Flos so that you can see just how much less fabric there is under the bum. 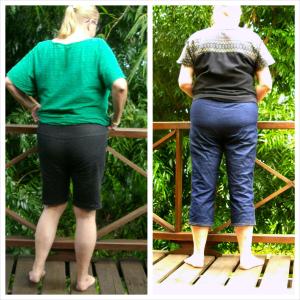 I then made a full length pair of in navy cotton spandex. And they were a complete FAIL. No photos because I can hardly get them on. Completely my fault due to poor fabric choice. I thought that the navy was the same as the red cotton spandex that I used for my first Barb shorts. But it wasn’t. It was much lighter weight and with considerably less stretch. But I did not let that defeat me.
I bought some lovely very dark indigo stretch denim. It is great fabric. Really soft and black on the wrong side so that you don’t get that light look when the denim is stretched.

And let me just say that I love these Flo jeans. They are hands down the most comfortable jeans I’ve had in years. i think I may have said that about the Barb jeans but these are even better. My husband was like “Wow, they fit you better in the bum than other pants you’ve ever had”. Actually he said that when I first made the shorts and it was completely unprompted. It seems he is paying more attention than I perhaps give him credit for :) 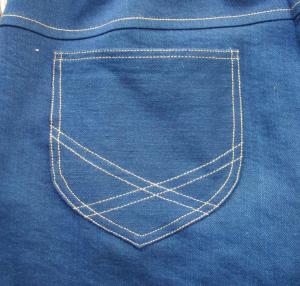 But really I know that the whole point of the pattern is the back view.

I’ve had to really overexpose these so that you can see at least some detail. On the next pairs (there will be several more) I will make the pockets smaller.

UPDATE: I’ve changed the photos to some slightly better ones. . But you will be seeing these again with the new tops I’m making to go with my fab new jeans. And then you’ll be seeing the next versions of these. I have some great black denim up next and I’m planning some capri length and next summer there’ll be more shorts.
So if you’re flat bottomed I can’t recommend this enough.
Is this your fitting issue? Have you tried the Flos yet or do you plan to?

I'm moving over to Wordpress. Hopefully, those of you who follow on Bloglovin will be automatically redirected. If not, or if you follow on some other way, you can find me at

I'm sure it's going to be an improvement so I hope you'll follow me over there.

This is pretty much an update on new fabrics in my shop so if you aren't interested then just skip it. But hey, it is fabric...

The Loy kratong celebrations last week signal the start of the holiday season for me. It will be no time at all before it is December and all the parties and socialising that come with it. Which can often mean new clothes and therefore fabric buying for sewing new clothes.

Now it is officially cool season here. While that means that the mornings and evenings are cooling down, they still aren't cool (they just aren't hot) and the days are still 30 plus degrees. Which kind of rules out a lot of fabric options. So if, like me, you are looking for vibrant colours, unusual and sometimes dramatic designs, with the cool comfort of cotton, then these may be for you.


I made my Loy kratong top from Chom Tong cotton and it comes in many stunning colours.

In April, I made my Songkran dress from handwoven mudmee (ikat) cotton. 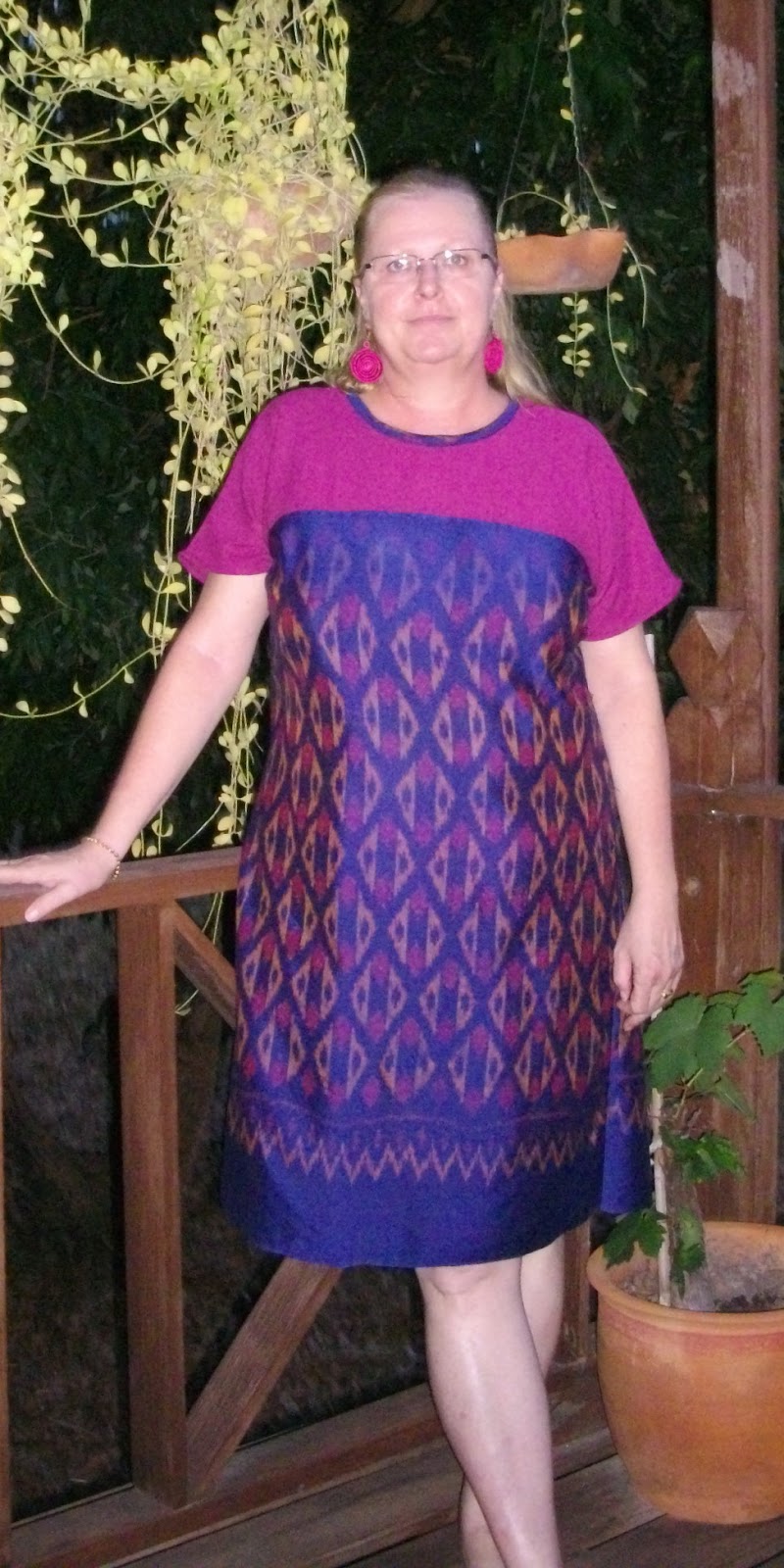 And I still love that dress. The fabric lifts what is a very simple design (Vogue V8805) into a really nice dress. Oh, and April is the hottest month here (think 40 plus degrees) and this is still cool and comfortable. I also probably shouldn't admit this but I machine wash it (on delicate) and line dry it in the shade and the colours have not faded. But of course, you should hand wash it:)

These cottons are only 100-120 gsm (3 - 3.5 oz/yd) and so are fabulous for warm weather and special occasions. Because of the weaving style you get lovely changes in colour as the garment moves and the light changes. And they come in some glorious colours and designs.

And they also come in some very festive colour combinations.

But if you are looking for more muted tones, I have a new line - Thai double gauze. Only a small selection to start but there will be a few more added soon. Although unfortunately double gauze is quite hard to find here so it will never be an extensive range. But it is so lovely that I'll take what I can get.

So if you are in the market for some fabulous fabrics, have a look at my Etsy shop. And if you have looked before, you will be pleasantly surprised by the reduced prices on the mudmee cottons. Because I have found new suppliers and am buying in larger quantities the prices are 15-20% lower.


So are you in the market for some special fabric for those special occasions?

Last Thursday was Loy kratong, which is one of my favourite Thai celebrations. You can read more about it here, but basically you float kratongs down the river and release khom loy into the air. It is truly beautiful to see.

I didn't take any pictures (which was rather neglectful of me) so I have shamelessly stolen some from my friend (but I'm sure she won't mind). 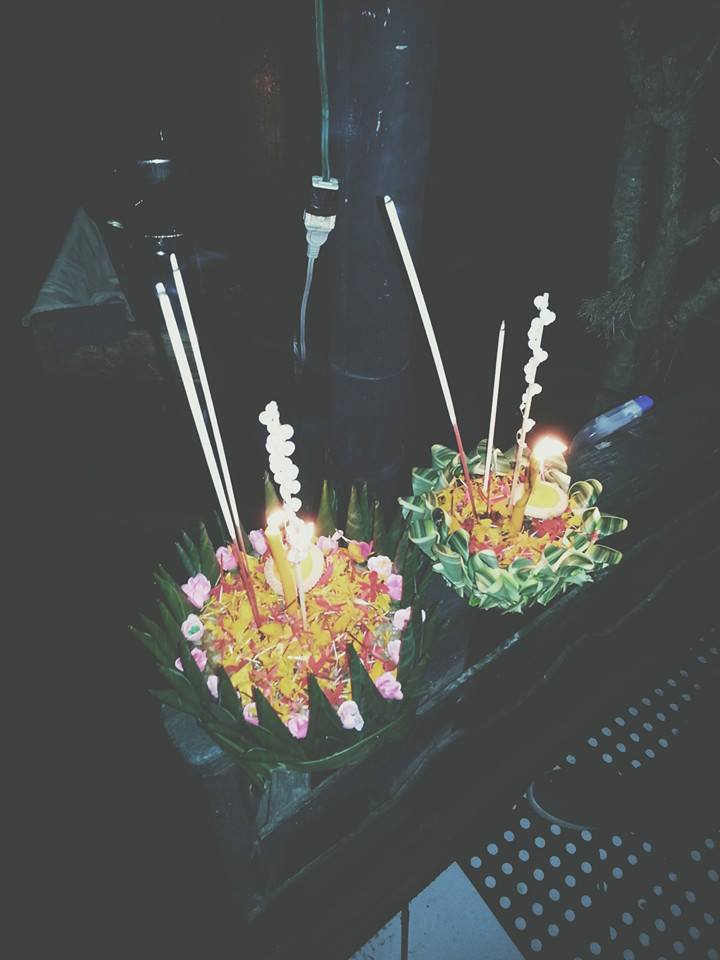 These are kratongs which are all handmade from natural materials. 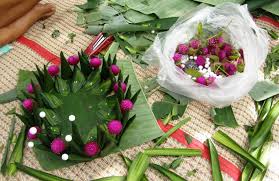 These are from google images but show how the kratongs are made (above) and some other kratongs below. 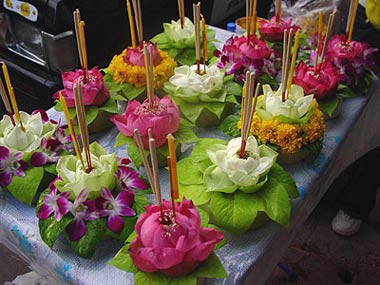 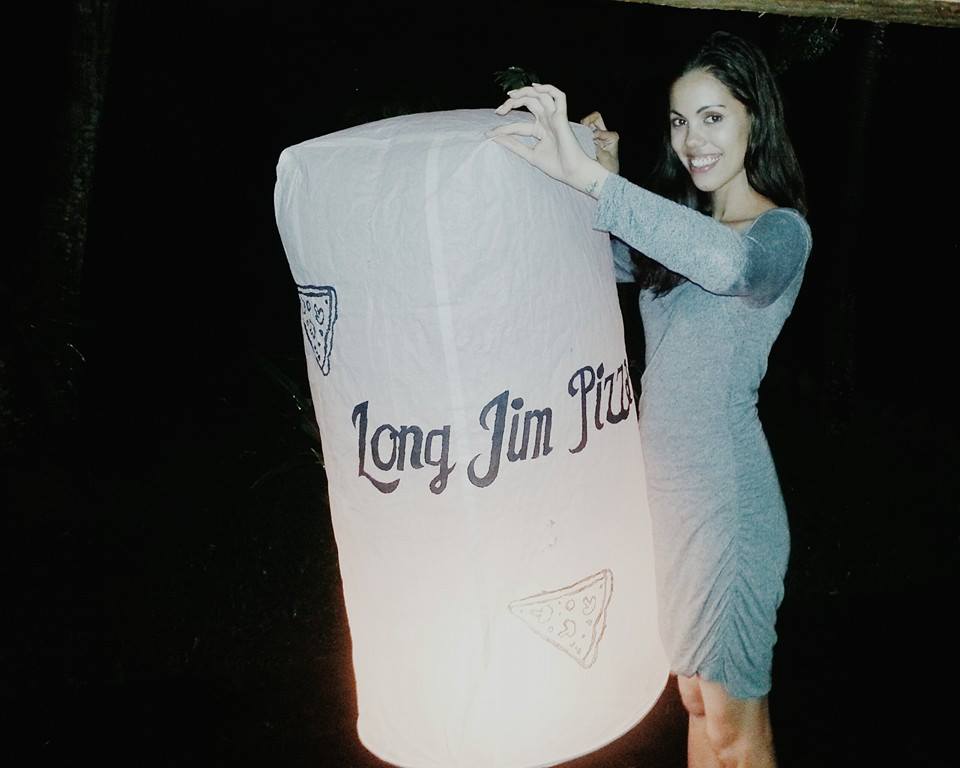 This is my fabulous friend, Jantra, about to launch a khom loy, which is basically a large paper lantern. 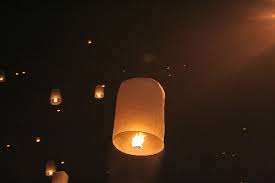 Another google image, khom loys being floating in the night sky.


I decided on Thursday morning to make myself something new to wear, which obviously I probably should have thought about a bit sooner, so it needed to be a fairly quick make.

I wanted it to be fun, cool and comfortable, and bike friendly. Because of the nature of the celebration, one of the many gorgeous Thai fabrics I have seemed appropriate. So I chose this Chom Tong cotton. 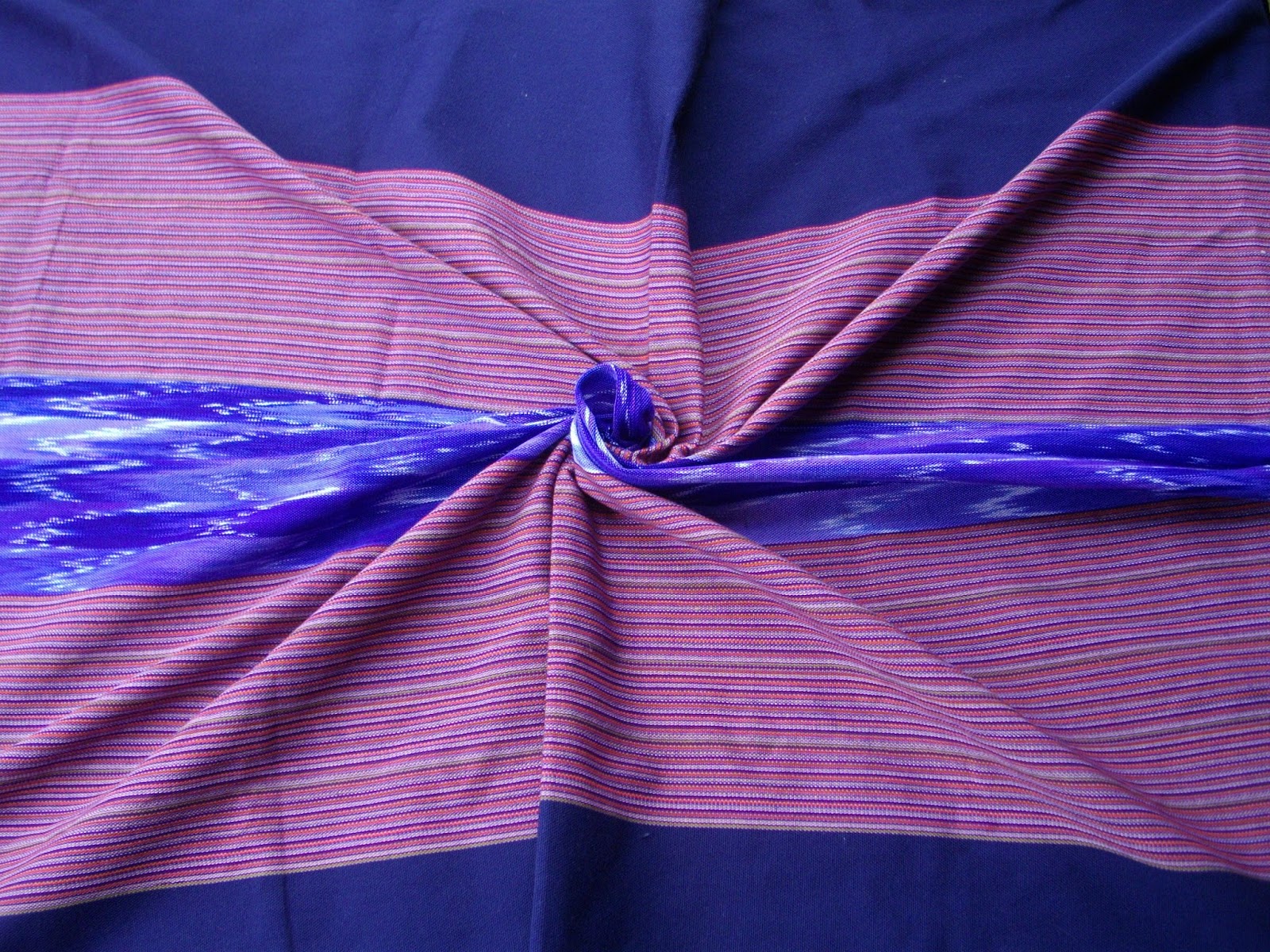 This is not the lightest weight fabric (190 g/m or 5.5oz/yd) but we are heading into cool season here  and the Loy Kratong celebrations are at night, so it would be fine. Although it also doesn't really drape. I'm hoping that the simple shape and bright (obnoxious?) colours will make up for it.

I was going to use M6566  because if you are using fabric like that a simple pattern is all you need. I knew that the first version had some neckline issues among others so I was all prepared to make some adjustments. And then I remembered that I had always planned to use the bodice of my Going Global Thai dress as a blouse pattern because I really like the fit. So I used that but without the buttons so the front is cut on the fold. As is the back, even though the original has a centre back seam.

I also knew that I didn't want the wide purple and white stripe to run down the centre front (or heaven forbid, around me). So this is what I came up with.

And it is fun, cool and comfortable, and bike friendly. 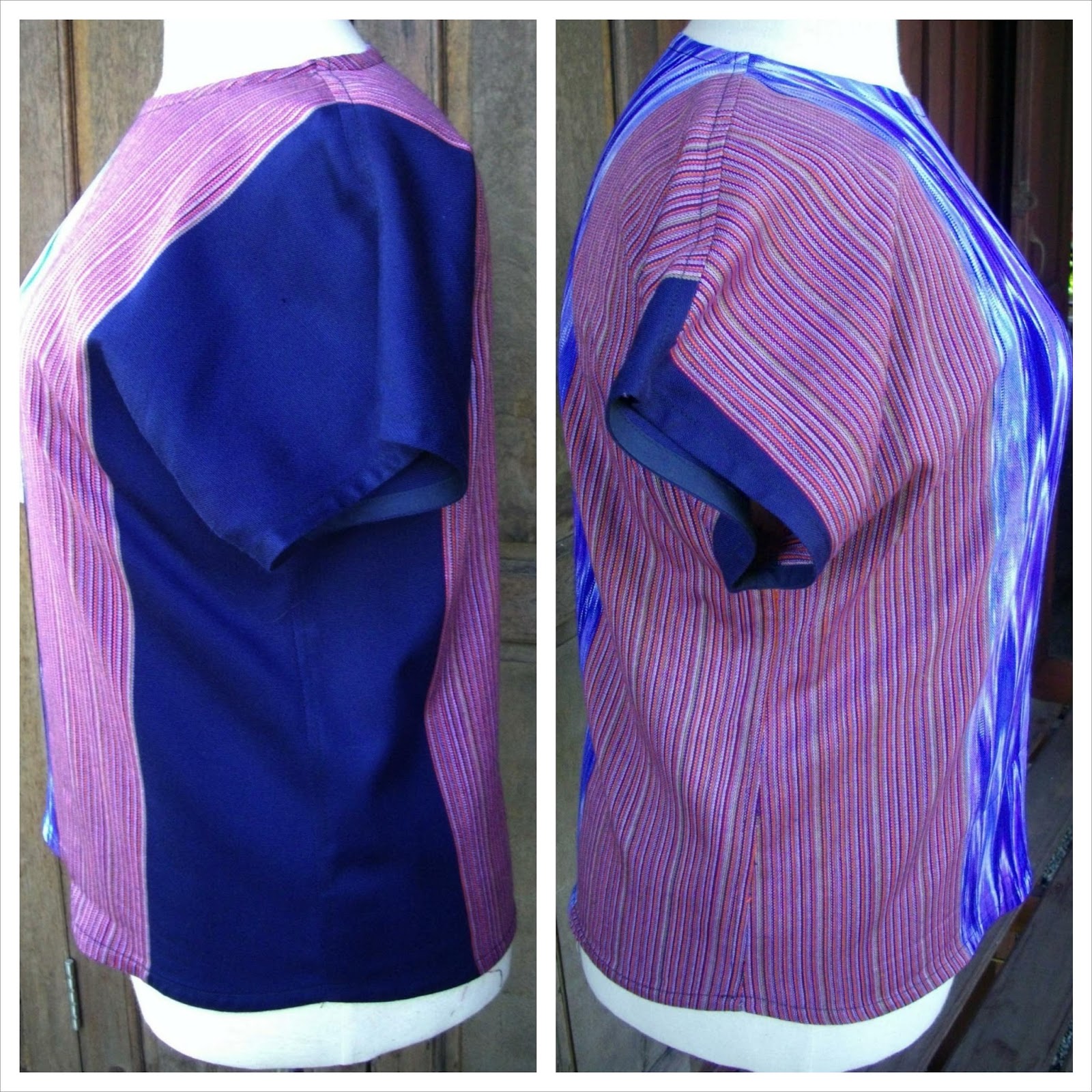 No, the stripes don't match on both shoulders. Because there is more fabric in the front than the back they can't both match. 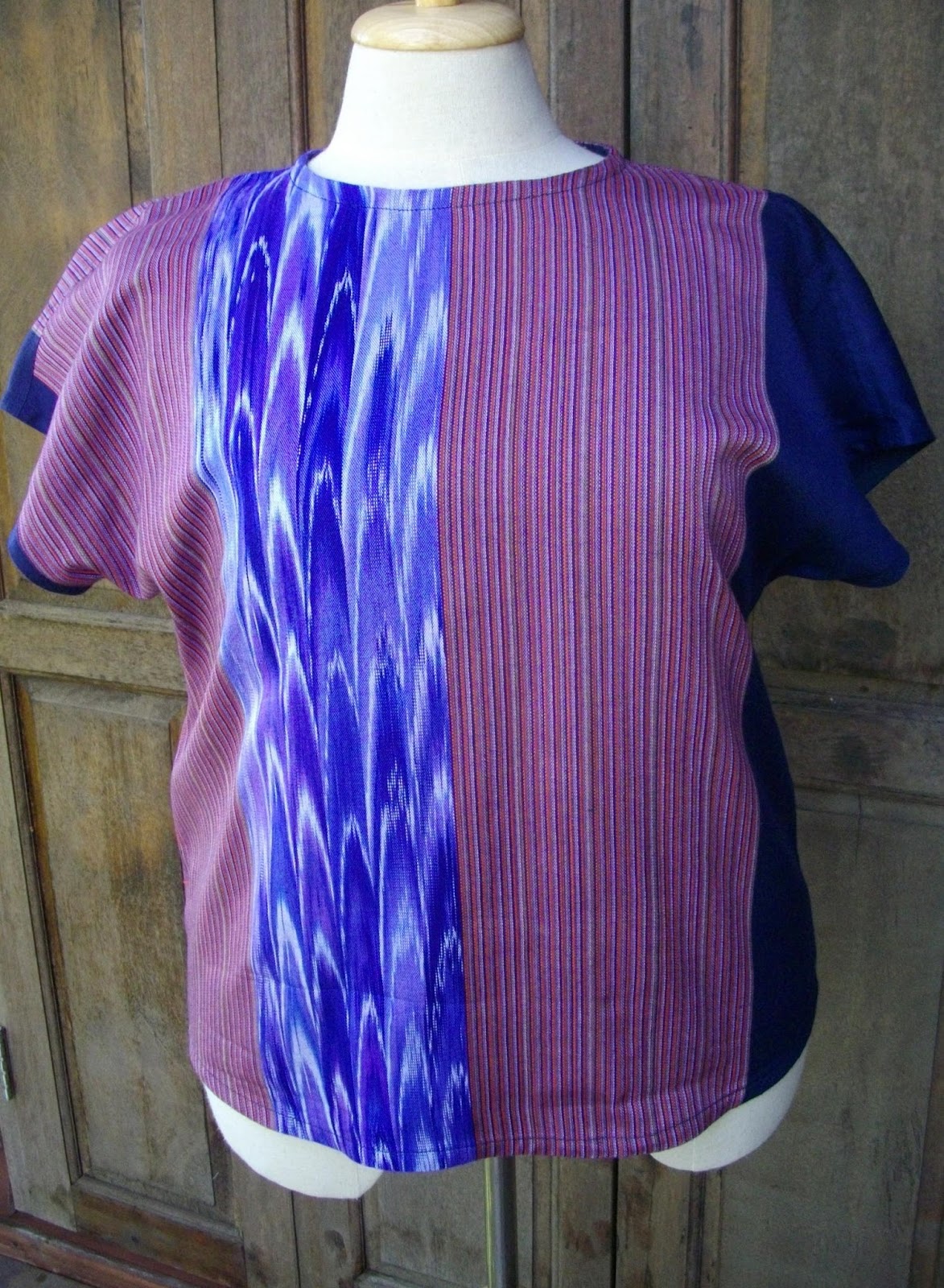 I wore it with jeans but I know it is going to get a lot of use with shorts to bike around town running errands.

EDIT: I forgot to put this in the first draft. I finished the neckline and sleeves with bought bias binding. I thought about perhaps making some from this fabric but that would have been a disaster. Because this fabric frays like crazy. I mean you only have to look at it and it frays. But only really from the warp (maybe?) so the neckline and hem were ok (they frayed but only a little). So careful handling, and early seam finishing is the way to go.


I'll be back with some photos of it on me soon. The camera batteries just died and I had just changed especially to take pics:( Oh, and I'll be wearing it with my Style Arc Flo shorts. Which are excellent by the way. More on that in the next day or so.

Would you ever use a fabric like this or is it just too much?

Yes, you did read that right. Maybe you remember that I made these as a muslin for my Barb pants. 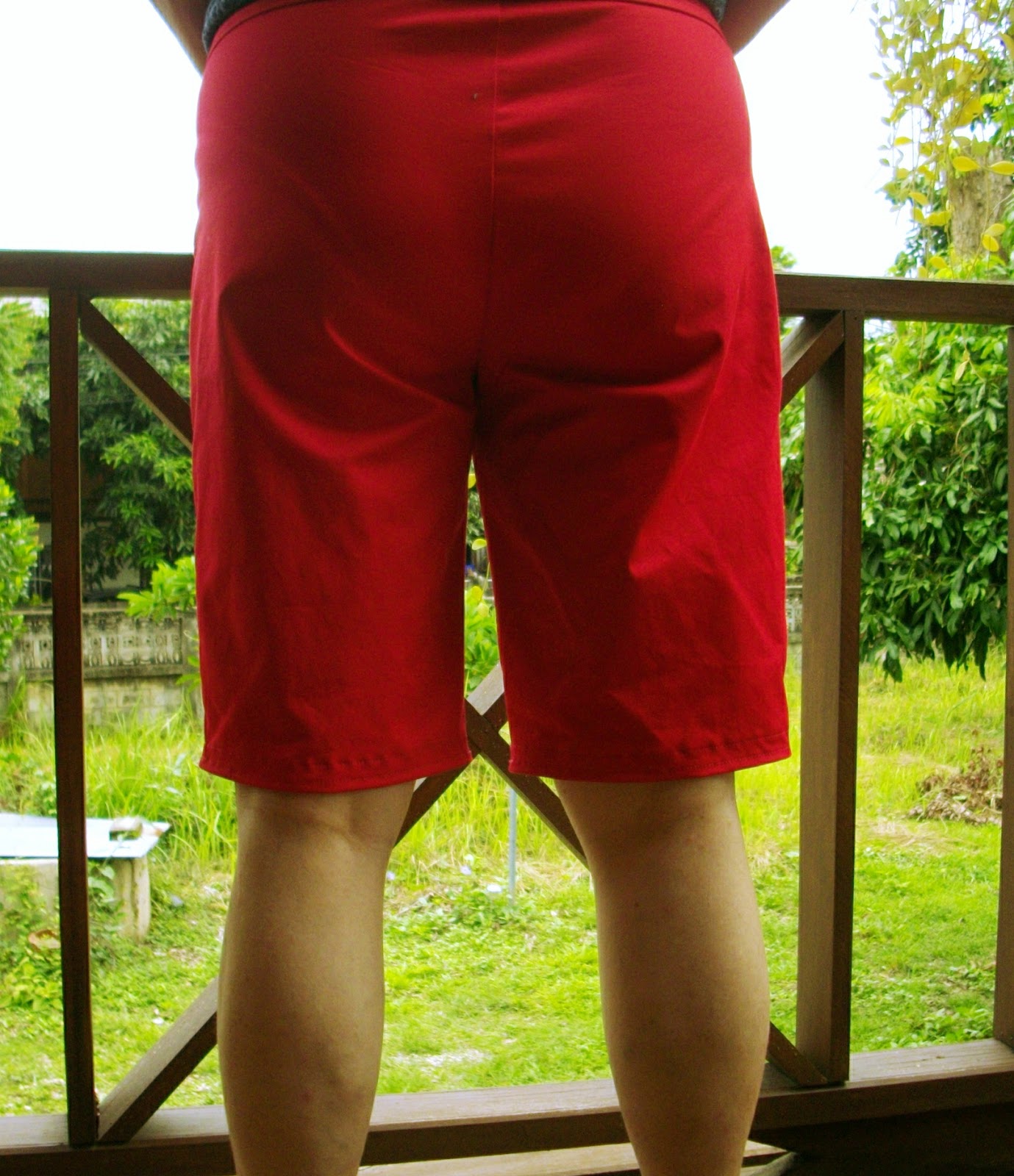 Well, it turns out that I don't actually have much use for bright red shorts. But it seems I do have a use for a bright red skirt. 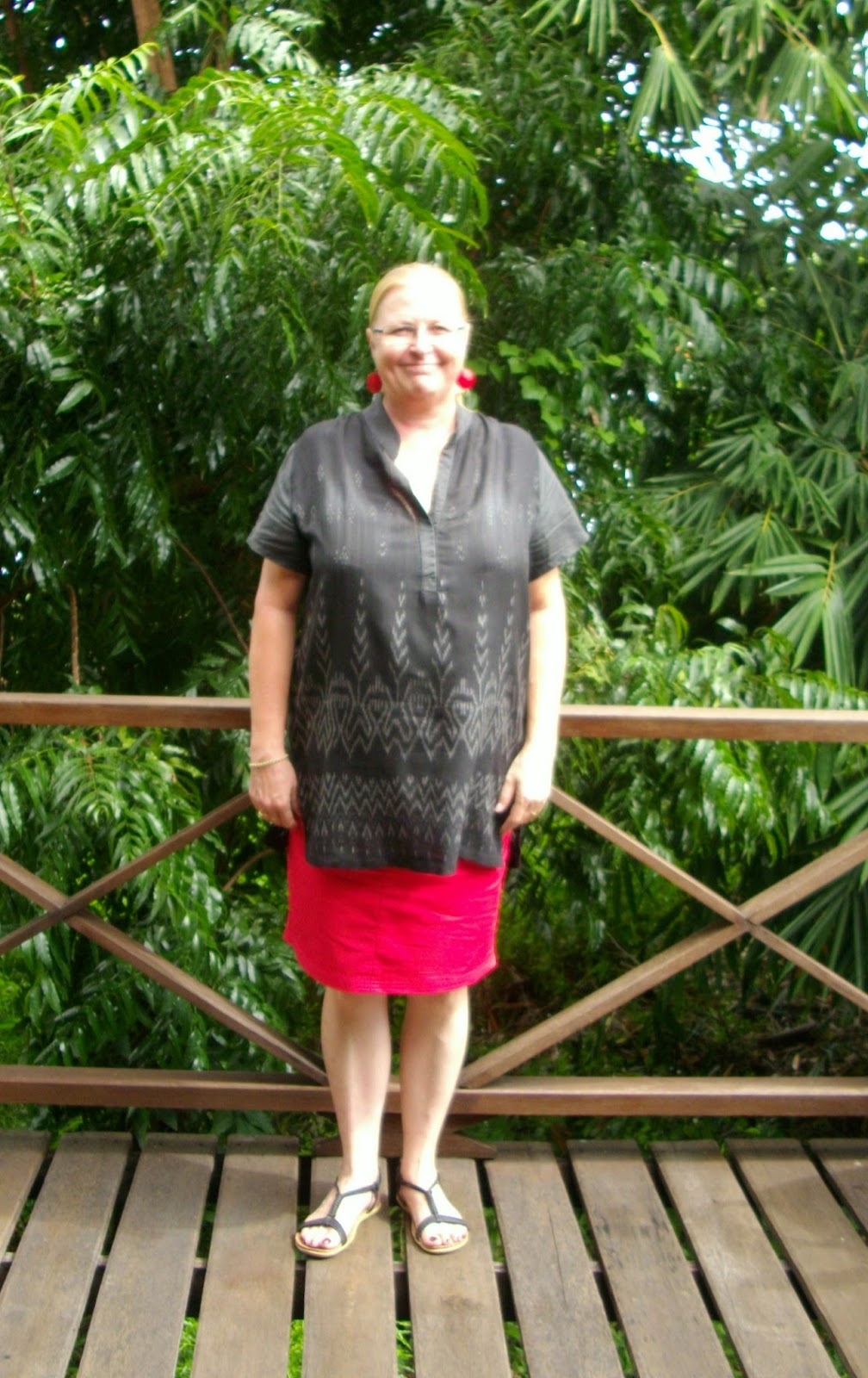 Although it looks bright pink and no amount of colour correcting works unless I'm bright green. So pink it is. 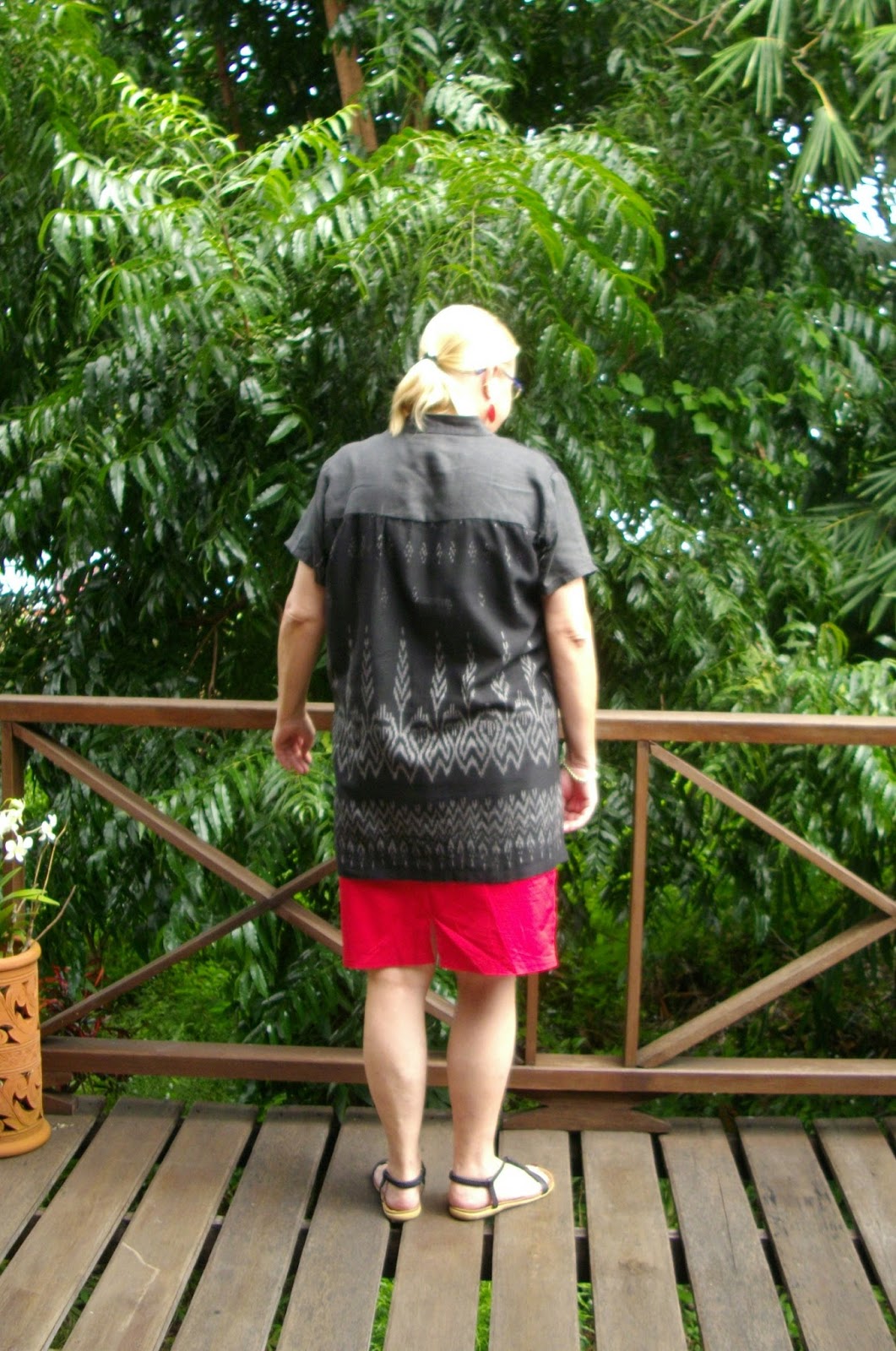 To change this from shorts to a skirt, I simply drew a line from the fullest part of the front and back crotch curve to the original seam line at the hem. I left a short slit at the back for walking ease. 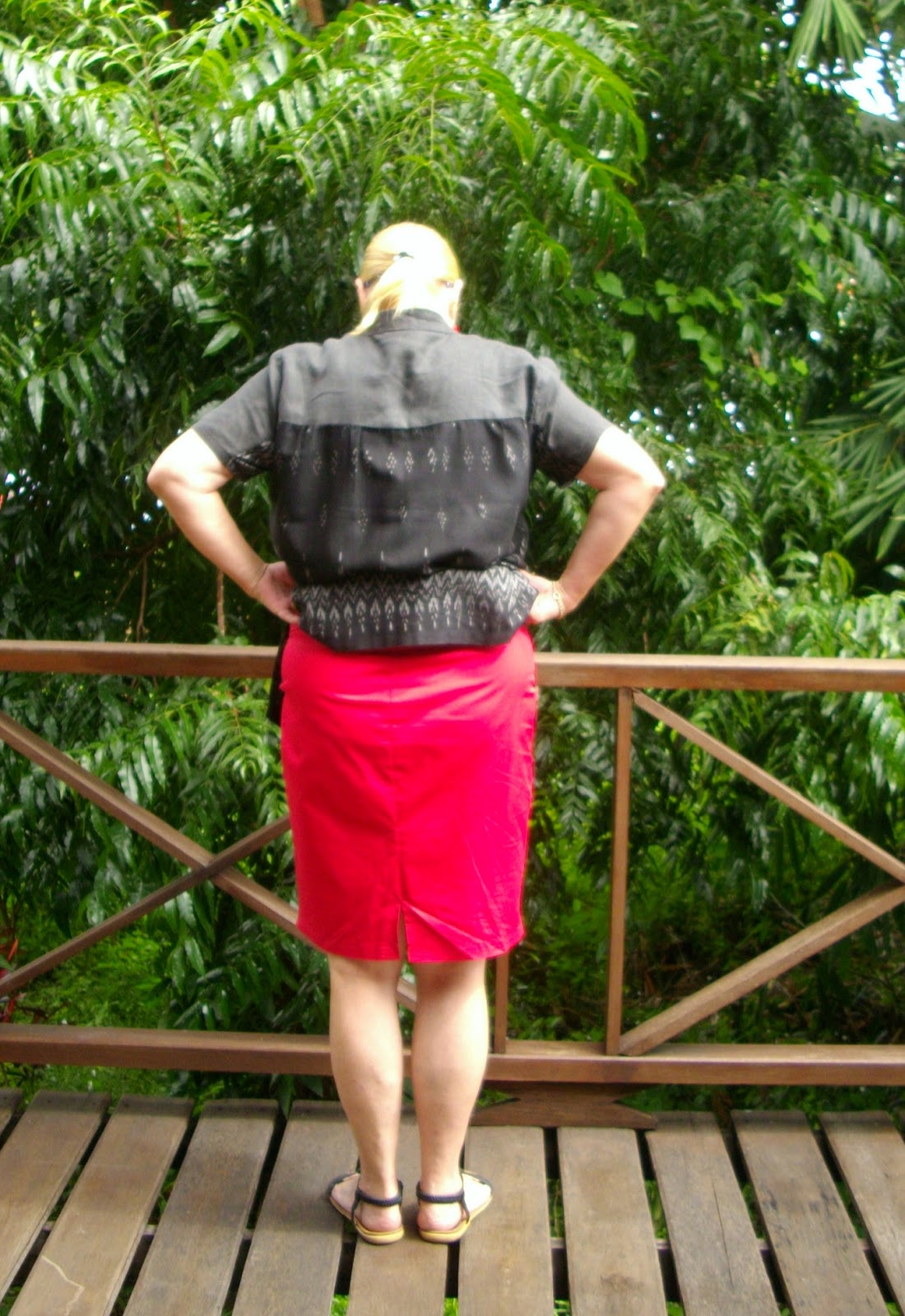 So a quick and easy alteration and a new favourite skirt. It also works well with the Black Thai Affair tunic which had been a bit of an orphan because its length makes it slightly difficult to pair up. 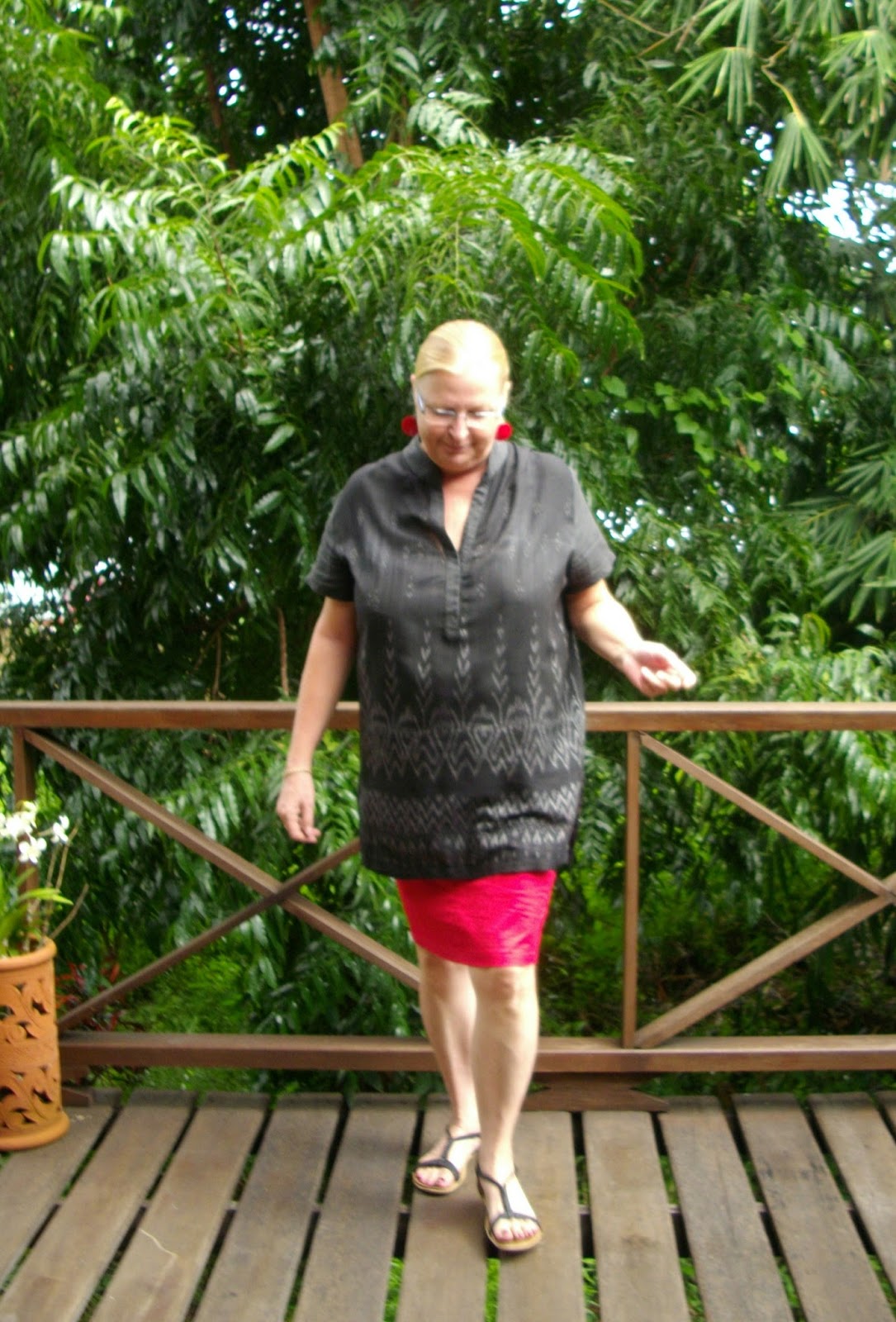 I can definitely see more Barb skirts in the future. 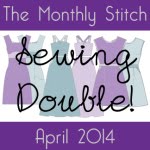 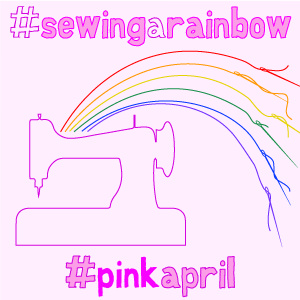 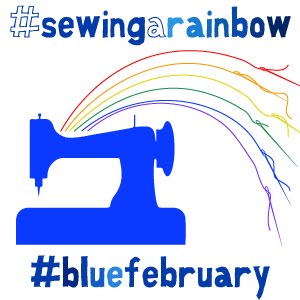 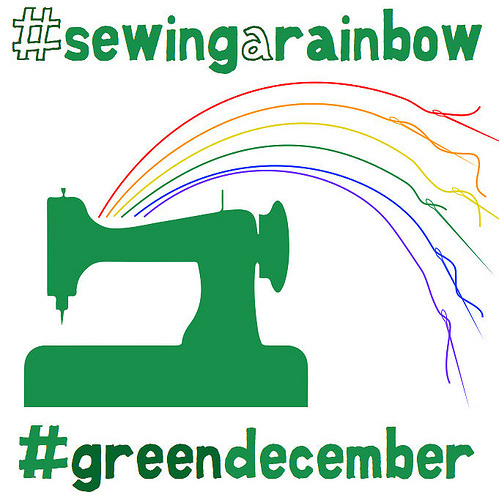